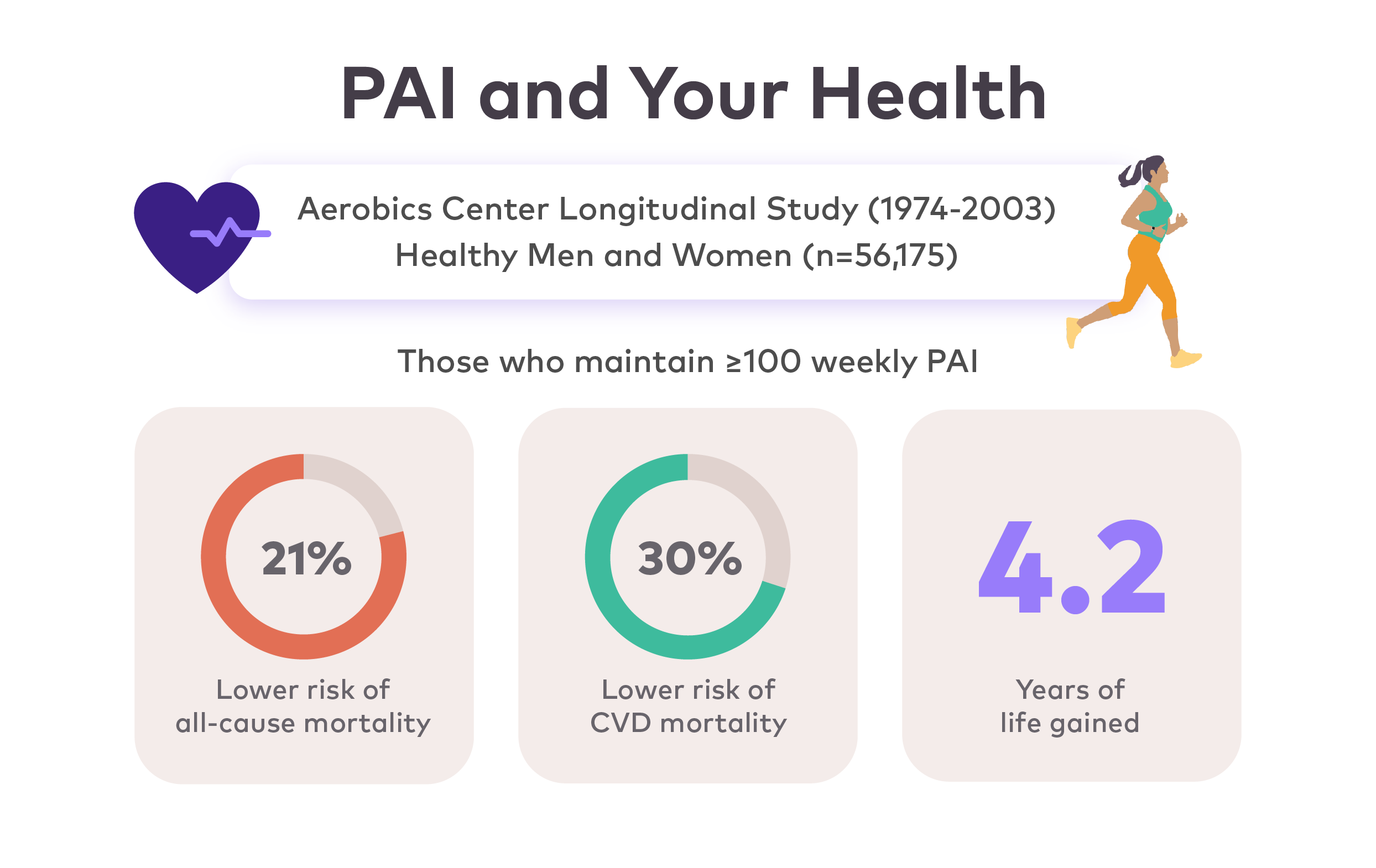 A recent study was conducted on over 56,000 American adults confirming that Personal Activity Intelligence (PAI) could be associated with lowering all-cause and cardiovascular disease mortality across diverse populations.

The Aerobic Center Longitudinal Study (ACLS) followed 56,175 relatively healthy Americans between 1974 and 2003, assessing participants through complete health check-ups and questions on their physical activity habits (such as type of activity, duration, and frequency). Researchers calculated PAI Scores for all participants based on these answers.

By the end of the study period, there were 3,434 total deaths, with 1,258 from cardiovascular disease (CVD). Comparing this data with participants’ PAI Scores and physical activity levels allowed the researchers to calculate the risk differentials of the inactive group (0 PAI) versus the active group (100 PAI or more). Individuals who maintained 100 PAI or more had approximately 20% reduced risk of all-cause and CVD mortality compared with those who had 0 PAI. This result was seen regardless of sex or age group.

Within different subgroups of the participants, maintaining 100 PAI or more had even more drastic results:

The ACLS study also took a look at how maintaining 100+ PAI compared to meeting today’s standards for physical activity (150 minutes of moderate-intensity or 75 minutes of high-intensity activity per week). Participants with 100+ PAI that met these guidelines were compared with those who had 100+ PAI but did not meet the guidelines - and it was found that as long as participants were maintaining 100 PAI or more, there was not a significant difference in the risk of dying from all-causes.

Most people are aware that they should be physically active, but many are unclear on how much activity they should be doing and what types of activity. This ultimately leads to difficulties for people to stay motivated. The guidelines of 150 minutes moderate / 75 minutes intense activity per week can be hard  to interpret on an individualized basis, whereas PAI makes it simple through a single intelligent score that is based on the past 7 days activity, telling people if they are doing enough.

The findings from this study suggest that PAI is an easier and more straightforward metric to guide people on how much physical activity is needed for effective risk reduction against lifestyle-caused mortality. Individuals can do any activity of their choosing, at various intensity levels, as long as they strive to maintain a weekly 100 PAI or more for optimal health benefits.

The history of PAI

The PAI algorithm was conceived by the Cardiac Exercise Research Group at the Norwegian University of Science and Technology as a means of determining exactly how much physical activity each individual needs to maintain cardiovascular health. The algorithm was derived from one of the largest health studies ever performed, the Nord-Trøndelag Health Study (HUNT). PAI uses heart rate data from wearable devices to assess current levels of activity, combined with an individual’s age, sex, resting and maximum heart rate.

Using the HUNT data, researchers validated that a PAI Score of 100 or more over time was found to delay premature death from CVD and all-causes, reducing the risk of mortality on average by 25% and adding an average of 5 years to life. The main limitation of these findings was that it was based on a large population of Norwegians.

With this new study by the ACLS, the PAI algorithm was further validated as a metric that can be used to assess physical activity levels across diverse populations.

PAI is backed by science